CANANDAIGUA, NY – Wizard of Clay, the premier hand-thrown pottery destination in the Finger Lakes, is celebrating 40 years as a family-owned and operated business. They will mark this milestone with an anniversary celebration on Saturday, Oct. 26 from 9 a.m. to 5 p.m. at 7851 State Route 20A, Bloomfield.

Opened in 1979, owner Jim Kozlowski, known as “Wizard 1,” and his wife, Lois, built a destination location for people to stop in and see the “magic” being made inside a hand-built series of attached geodesic domes that became the Wizard of Clay retail store and workshop. Known for their classic Bristoleaf® design, Wizard of Clay uses indigenous leaves on some of the pottery.

“There’s not a lot of small businesses that make it this long,” said Northrup. “In a world where everything is bought on Amazon, this family-run, family-operated business is a testament to my in-laws. They built a foundation, and now we’re keeping it going.”

The celebration will include a pancake breakfast by Kettle Ridge Farm, live demos and sales from local artists, and a visit by Angel from Lazy Acre Alpacas, along with raffles, giveaways, and demos on the wheel. Commemorative pieces of Bristoleaf pottery will also be for sale.

Noble Shepherd Brewery, located next door to Wizard of Clay, will serve a 40th anniversary Wizards Brew made with hops from the pottery property.

“Wizard of Clay is a one-of-a-kind place where people know they can find quality work,” Northrup said.

She says the celebration is a way to say thank you to their loyal customers.

“It’s the people that keep our business open,” said Northrup. “This celebration is a way for us to say thanks to our loyal customers.”

Finger Lakes Visitors Connection has been the official tourism promotion agency for Ontario County for the past 35 years. Its mission is to create visitorship and economic vitality for Ontario County by marketing its tourism assets and positioning the area as a premier leisure and meetings destination. For more information on FLVC, call (585) 394-3915 or go to VisitFingerLakes.com. 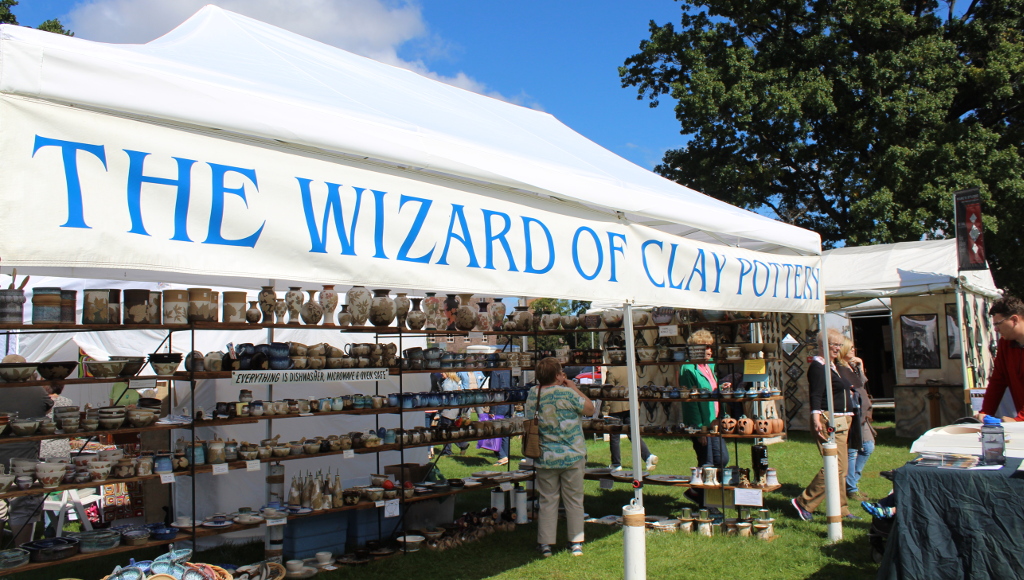 Once again we were at the amazing Rochester Memorial Gallery grounds for the 2017 Clothesline Festival. The weather was perfect all weekend, and there was an amazing turnout. Thank you all who stopped by to talk , browse, and buy! Rochester has an incredible community supporting the local area artisans.

If you would like to see more, please visit our studio and shop located in the beautiful Bristol hills.

Just a friendly reminder that we are closed Thursd